The 2017 European sorghum grain harvest accounts among the bests of the past 10 years and has achieved a significant increase in terms of production which is due to an increase in acreages and yields compared to 2016. Generally, the climatic conditions of 2017 have allowed limiting water-stresses during the sensitive phase around ear emergence. Given the cumulated temperatures, most of harvests happened fairly early, from mid-September to mid-August, with moisture levels in most cases lower than 20% or even 15% in certain country (Romania, Ukraine and Russia).
The energy value of sorghum produced in Europe remains high: 3845 kcal/kg of DM (dry matter).

Stability for proteins and slight decrease for starch

With 3845 kcal/kg DM on average, sorghum harvested in 2017 confirms its high energy value for the feeding of poultry. This value is close to that of 2016 sorghum (+ 14 kcal/kg DM) and is higher by 53 kcal/kg DM than the five-year average (3792 kcal/kg DM).
Results are homogenous in the surveyed regions. 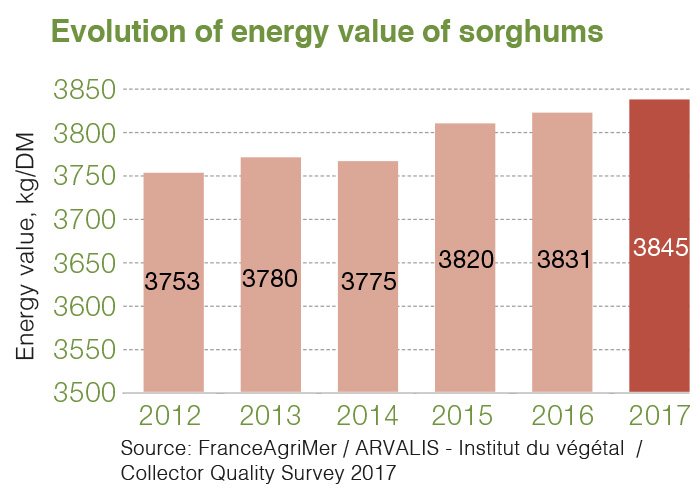 Its fat contents (4.5 % DM) and low levels of fibre (content in walls insoluble in water 8.6% DM), explain the slight increase in energy value of sorghum grain this year. It is 3.2% higher than corn (respectively 3845 vs. 3725 kcal/kg DM on average in the FranceAgriMer / ARVALIS – Institut du végétal 2017 survey).

Therefore, the proteins content and the high energy value of sorghum grain harvested in 2017, and the low tannins contents of the varieties harvested in Europe, are all undeniable assets for the use of sorghum grain in animal feed.
These results thus show that provided collecting, drying and storage operations are properly implemented, sorghum should find a significant outlet in animal feed.

The survey covers 10 French departments which approximately represent 85% of the French sorghum production. Samplings are undertaken with collecting organisations in the main production areas. Grain picking are undertaken in silos at the end of the dryers at the beginning of storage period. Chemical composition analysis (proteins, starch and fat substances) are made on the 20 primary samples. Measures of water-insoluble walls and of the energy value for roosters are undertaken on the four “regional mix” resulting from the mixing of each region’s elementary samples.

Sorghum has been one of our ingredients for ten years now.

THE EU TO UNLOCK FUNDS FOR SORGHUM PROMOTION IN EUROPE