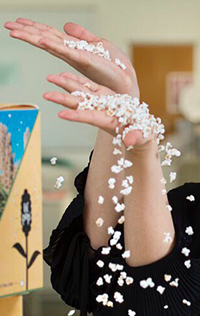 The Healthy Crop LTD, headquartered in Edinburgh, Scotland, are pioneering the consumer sorghum trend with their first product, lil’POP, a packaged popped sorghum snack. Founder, Sydney Chasin, diagnosed with coeliac disease at age 7 and grown up in a small US farm town, has been consuming sorghum grain in a multitude of applications—everything from beer to flour to syrups and beyond. After her undergraduate degree at Edinburgh Napier University, Chasin identified a large gap in the European free-from market for sorghum grain products. “The popcorn market is booming and the quinoa, ancient grain and the free-from market are growing at record speed, but where is the drought-resilient, superhero crop, sorghum?” comments Chasin. Once recognising the gap in the market, she entered her idea for a mass market, consumer facing, sorghum brand into a student startup competition, won initial funding, at it all kicked off from there.

It certainly hasn’t been a straight forward journey for Chasin, “Introducing the “new” 8,000 year old grain to the UK market has been challenging, yet rewarding.” Initially, Chasin produced lil’POP out of her home kitchen to test the concept with retail buyers and consumers and tested the product at Stockbridge Market. Now her popped sorghum product is produced on an industrial scale, gaining traction with large retailers. 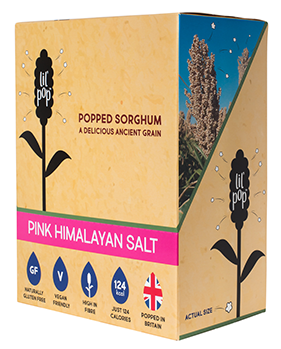 Water sustainability is at the heart of the brand, educating consumers on the importance of drought-resilient crops, introducing sorghum as a sustainable grain with a low water footprint. Of course, taste plays a vital role in the success of any food company, and popped sorghum yields a naturally delicious, nutty, crunchy, and satisfying taste. As sorghum has a soft hull, which does not detach in the popping process, there aren’t pesky hulls that get caught in teeth, making a more pleasant popped snack experience.

lil’POP is currently available in a pink Himalayan salt flavour and will be joined by a range of flavours later this year. But, lil’POP is just the beginning for The Healthy Crop LTD, as their company ambition is to create a range of sorghum products across grocery categories, demonstrating the benefits of the grain to the masses.

The Arterris cooperative has been using sorghum since the 1980s

Sorghum: they talk about us in the media!