Field days in Bulgaria and Iran, conference in the French agricultural cooperative Terre Atlantique and press trips for Austrian, Hungarian, Turkish and Iranian journalists… the months of August and September were intense in events for Sorghum ID. 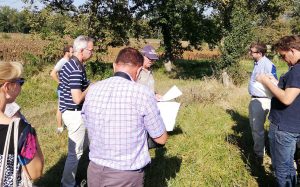 The press trips were focused on discovering the French sorghum value in the region of Toulouse.
A total of 12 journalists could discover the value chain from seeds to processing through the visit of research and development stations, field visits on sorghum seed breeding areas, and meetings with producers. Journalists could witness the assets and diversity of sorghum: red, white, silage. The topic of uses was also mentioned, thanks to testimonies of downstream representatives and visits of animal feed plants.

Field days in Iran (Qazvin) and in Bulgaria (Shumen). 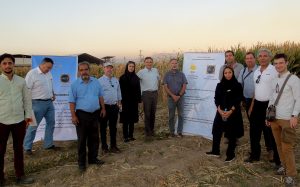 In Iran: the events organised by the FNPSMS took place in the framework of the promotion programme for the maize and sorghum genetics. They took place in the president of FNPSMS President Pierre Pagès on 25 September 2018 in Qazvin. This very technical day allowed highlighting the maize and sorghum varieties produced by EU producers.
The day began with a conference organised together with the Iranian Agriculture Ministry, and brought together a hundred of participants. The Vice-Minister for Agriculture, Mr Keshavarz, underlined the importance of this programme for the Iranian agriculture, with research towards more modern, more productive varieties with better tolerance for droughts. He also insisted on the importance of knowledge transfers with Iranian farmers, especially concerning field production techniques and uses of maize and sorghum, both grain and silage. In this perspective, Arvalis presented the keys of successful sowing, the water valorisation potential of maize and sorghum, as well as the complementarity of both silages in ruminants’ rations. The day continued with the visit of two field trials in the region, demonstrating 30 varieties of maize and 17 varieties of sorghum. 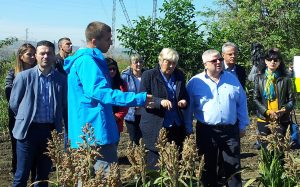 In Bulgaria, the field day took place on 28 September in partnership with the Agricultural institute of Shumen, represented by Dr Kalin Slanec, Bulgarian seed breeder and Sorghum ID member. This day began with a presentation of the Sorghum ID association and seed breeding companies. It continued with the visit of the field trial. In total, 25 hybrids produced by 5 seed companies were presented. Thanks to this day, the genetic progress was demonstrated, as well as the accomplishments of seed breeders. The day also allowed exchanges between farmers, seed breeders and Sorghum ID. 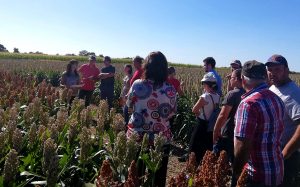 On 11 September, the Terre Atlantique cooperative organised for its members a half-day conference dedicated to sorghum. This was the occasion for Sorghum ID to present its objectives and field of action. The second part of the programme was presented by Terre Atlantique and focused on crop agronomic models. The third part of the programme was focused on transformation and possible outlets, as animal feed or human food. The last part raised a lot of interest and many questions. The day ended with the visit of a field trial where 17 red and white sorghum grain hybrid varieties from 3 different seed companies were cultivated. Seed breeders could thereby highlight the assets of the French varieties, such as its early harvest, productivity, or also the absence of tannin, which is key for a good digestibility by animals.

Sorghum can help the following crop, especially if…