Given the weakness of its own production (45 000T), historically, Spain is accustomed to importing supplies from the rest of Europe: France, Ukraine and Russia, for almost all of its needs. But since May 2018, it has extended the supplier countries to a new player: the USA. Due to the China-US trade war, which pits the two countries against each other through customs duties, the latter is finding in Spain an alternative to sell the volumes that were previously sold to China. It all began in May 2018.  China, in response to tariffs imposed by the US on Chinese steel, retaliated with tariffs on certain US agricultural raw materials, including soybeans and sorghum. As a result, Chinese imports of American sorghum have fallen from over 6MT per year to almost 0, leading the US to seek new markets, particularly in Europe. American exports to Spain began in May 2018: nearly 250,000 tonnes between May and June 2018, and 700,000 tonnes since September.

US sorghum in Spain: threat or opportunity? 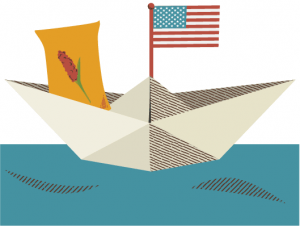 The strong breakthrough of American sorghum on the Spanish market could generate some fears from European operators. However, until now Spain has imported mainly from southwest France, and more occasionally from Ukraine and Russia. To date, American exports to Spain have had no impact on French exports: volumes have remained stable over the past 5 years. Exports from Ukraine and Russia have decreased, but this is mainly due to the lack of available volumes in these two countries, which had not anticipated the increase in Spanish demand. Thus, the explosion in Spanish consumption of sorghum (mainly due to the needs of the pig industry) shows that this cereal has real qualities for formulations and that animal feed represents a strong outlet for the future.

Europe has serious assets to meet this demand, with star sorghum which, thanks to its genetics, has a very high potential for productivity. Moreover, the quality of its seed and the diversity of the soil and climate conditions in which it can be produced make its production safe.

Do you know what is in a sorghum kernel?

Sorghum continues its meetings and conferences.