1.5 times more! This is the price difference between sorghum and maize in the USA.

The rise in sorghum prices is mainly due to a combination of two factors: 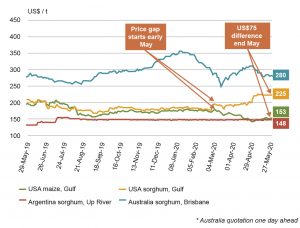 Keep in mind: usually, US farmers only grow sorghum if the price of sorghum is 1.1 times that of maize.

Behind the scenes of the Hungarian sorghum success story.

Sorghum ID resumes its cycle of events in autumn