The future of sorghum in Turkey

From 6 to 9 February in Izmir, at the Agro Expo exhibition, Sorghum ID welcomed many visitors. This trade show has the double advantage of being very well attended and of mobilizing a diversified public: farmers, breeders, seed companies, processors, retailers, officials, press… are all present. Agro expo was an opportunity to observe the complementary nature of maize and sorghum crops in Turkey. Maize is a flagship crop in this country, with surfaces that should reach 1 million hectares this year, thanks to a very voluntarist subsidy policy on the part of its leaders. But sorghum also has its place there, especially in Central Anatolia, which is facing problems of water availability. A conference on this topic is scheduled to be held in Konya on 20 March. Sorghum ID will speak at the conference to show those who are not yet aware that in the context of limited water resources, sorghum is a solution for the future. 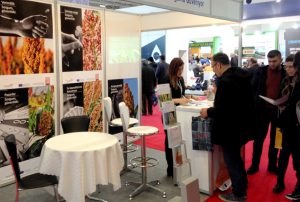 Another important message remains to be conveyed in Turkey: sorghum is rich in starch and tannin-free. In order to inform processors about this and the general interest of sorghum in animal feed, a complete documentation has just been published on this subject.

This conference will take place within the framework of the Konya-Tarim Agricultural Fair. Entitled “Sorghum, a crop of the future: The assets of sorghum cultivation and its various uses”, it will be led by three French experts on the following themes:

€323 /ha. This is the production cost of 1 hectare of sorghum in France.