Behind the scenes of the Hungarian sorghum success story.

Ferenc Farkas is an experienced agronomist. During his studies at the Georgikon University of Agricultural Sciences in Keszthely, he completed several internships in the field and on farms in Austria and the United States. Since June 2012, he has been managing the Hungarian subsidiary of Euralis Semences, the market leader in Hungary for sorghum and soybean seeds.

In Hungary, sorghum is a well-known traditional crop, and it is grown in different forms (sorghum bicolor, grain sorghum and silage sorghum). However, the crop has lost ground because of the high tannin content of its grains, which was a limiting factor historically in animal feed. Unfortunately, although for years the hybrids on the market no longer pose a tannin problem, prejudices on this topic remain. Another difficulty is that from the 2000s onwards, the red and white grain crops produced in Hungary were exported to Northern Europe for the bird market, due to the lack of outlets in our country. 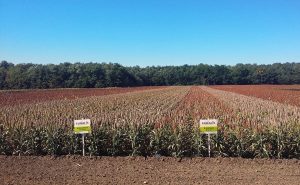 At Euralis Hungary, in 2015 we initiated a reflection on the theme of global warming, with the desire to propose concrete solutions to our partners working in the regions most exposed to drought. Due to a lack of irrigation, 3 years out of 5, maize production is low and not profitable enough. After analyzing the pedoclimatic data of these regions (which account for 10 to 15% of the area devoted to maize), we came to the conclusion that they were unsuitable for safe and profitable maize production. In the same context, grain sorghum has some favourable advantages: 30 to 40% lower water requirements, lower susceptibility to pests, greater flexibility in sowing dates, yield potential equivalent to that of maize and even 1 to 2 tonnes more on average. The year 2017, which was particularly dry in Hungary, gave a new impetus to sorghum cultivation. 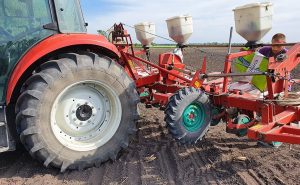 For producers, sorghum is a new crop. From the outset, we considered that we had to accompany its development agronomically to give it every chance of success. This is what we have implemented with our partner Agroszemek Kft, a well-established expert in the field. Together, we “took the growers by the hand” to avoid the most common mistakes. Of course, some mistakes still occurred, but the farmers had a contact person to exchange with, understand and progress.  This pragmatic approach enabled us to motivate the producers. But … processors remain to be motivated. 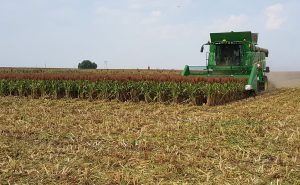 The adhesion of grain sorghum processors.

At the same time as production was taking off and before it became as large as it is today, we started discussions with the processors. Our objective was to identify existing obstacles and to publicize the advantages of today’s sorghum. To convince them, we had to teach them that grain sorghum is:

We needed pioneers. Well-known and leading companies in their field, such as Tranzit-Ker Zrt, committed themselves to conducting animal nutrition trials to develop the grain sorghum market in northwest Hungary. The conclusive results of these trials have led an increasing number of feed companies and formulators to take an interest in sorghum. Integrators such as KITE Zrt or the BONAFARM Group have in turn mobilised themselves. This was a turning point, because without its players, sorghum would have no outlet, and without an outlet it is pointless to produce sorghum. 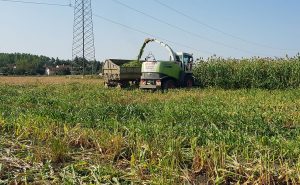 Dialogue with sorghum processors for fodder

We are currently conducting the same approach with regard to fodder sorghum. It is very easy to convince a farmer – cattle breeder – that he will secure his crop better with fodder sorghum than with maize. But it is also necessary to answer the questions he has about the nutritional value of his fodder. For this purpose we have teamed up with renowned experts: Szilvia Orosz (ÁT Kft.), Eszter Galamb (UBM Zrt.) and Vitál-Feed Kft. Thanks to their work and professional input, we are able to combat the prejudices against sorghum that still exist. 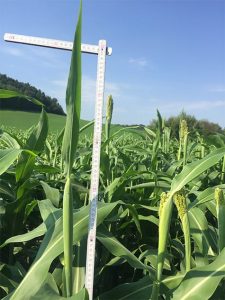 A promise of success

After three years of work, we can observe that producers are starting to produce sorghum more easily. They agree that with the hybrids the crop is profitable, even in areas that are not ideal for maize production. These producers have achieved an average yield of 7-8 tonnes/ha of grain sorghum, and in some places the yield has exceeded 10 tonnes. Even received reports of a yield of 13 tonnes somewhere! And the minimum crude protein content of 10% is achievable. Currently the main outlet for grain sorghum remains animal feed, but exports are also growing. We are also optimistic about sorghum for fodder, because the analyses carried out by Vitál-Feed and partners on the nutritional values are very positive. Furthermore, at Euralis we are convinced that thanks to its gluten-free and mycotoxin-free profile, sorghum also has a bright future in human food. We will therefore continue to support the development of Hungarian sorghum.

With Soufflet, sorghum is progressing in new departments