I am optimistic about the future of sorghum in France.

Julie Toussaint discovered agriculture during her thesis. Since then, this scientist with a research background has never left the sector, developing a predilection for varietal creation and later sorghum. “I am convinced that it is thanks to seeds and varietal choice that tomorrow’s agriculture will meet the new challenges it faces, and that sorghum is a crop of the future”. At Semences de Provence and Eurosorgho (Europe’s leading sorghum varietal creation program), she is fully committed to this principle.

Sorghum is in our genes

Semences de Provence is a seed company in the south of France whose vocation is to provide farmers with varietal solutions that meet specific pedoclimatic conditions. Since its creation, it has therefore naturally oriented its research towards species and varieties that are more tolerant to drought and make the best use of available water. “This is how we have specialised in sorghum, which today represents 60% of our activities.”

Historically in France grain sorghum was cultivated in the South-West, but the arrival of earlier varieties has made it possible to extend its area of cultivation northwards: today in the Centre-West grain sorghum areas are expanding rapidly. “Motivation is high, but technically, sorghum requires farmers to learn how to control weeds, in particular. Where a local actor (opinion-leader or collector) is involved, the acreages increase more strongly; this helps the farmer to successfully grow this crop, which is very different from maize,” notes Julie Toussaint. Moreover, the desire of farmers to secure their fodder supplies (single-cut sorghum silage) and the versatility of the new quality BMR and PPS multi-cut varieties are encouraging the development of sorghum as a main crop in certain livestock sectors.

As a solution to global warming, a source of diversification in rotations, and an alternative crop when historical productions are confronted with climatic or parasitic accidents, sorghum also offers good profitability prospects.   “The economic profitability of sorghum is more than adequate, especially in regions without irrigation, which are currently experiencing recurrent droughts. In France, the price of grain sorghum is indexed to the price of maize – around €5. However, the cost per hectare in seeds is lower. If bottom fertilization and weeding are necessary, starter fertilizer, insecticide and slug pellets are not essential. Economic profitability is therefore easier to achieve”. In addition, sorghum also allows savings in terms of working time. “Once the crop has been sown and weeded, there is no more intervention to be planned before harvest”, Julie Toussaint points out.

As for yields, even if the variability is high (from 20 to 110 CwT/ha depending on the weather, the land and the farmers’ mastery of the technique), they are quite satisfactory. For grain sorghum, they are around 55 CwT/ha: 51.2 CwT/ha in 2019, 53 CwT/ha in 2018 and 57.8 CwT/ha in 2017*. While in monocut or multicut sorghum, this varies according to the varieties and the farmer’s objectives (milk forage unit, sugars, starch, yield). There are varieties with high energy potential with milk forage units greater than 1 for which the dry matter yield is in the range of 10 to 15 dry matter content/ha, and other varieties more focused on the production of “volume” which can go up to 20 dry matter content/ha. “These yields are indicative and vary greatly depending on soil and climatic conditions,” says Julie Toussaint. 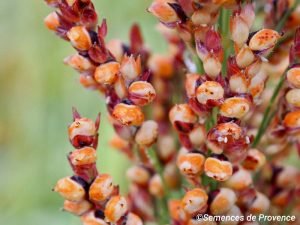 In terms of genetics and seed quality, whether for grain or silage, farmers expect first and foremost hardy varieties, stable yield and good early vigour to quickly cover inter-row distances and limit weeding, as well as good drought resistance (stay green is a characteristic that applies more or less to all varieties). Further north, tolerance to lower temperatures at night (< 12°C) is an important criterion for very early grain sorghum varieties. “Resistance to diseases and pests is not often mentioned by farmers, as sorghum is not subject to strong fungal or insect attacks in France.”

Breeders, for their part, justify their varietal choice on the basis of the feed value, which itself depends on the needs of the herd. Not forgetting the resistance to lodging.

Unlike silage sorghum, which is consumed directly on the farm, grain sorghum offers diversified outlets.  There is not a lot of self-consumption of grain sorghum (less than 5% of French production is destined for poultry and pig farms) and is mainly used for the production of cattle feed (30% of production). Manufacturers who include sorghum in their recipes appreciate its price and its high protein content (+1.5% compared to maize). This outlet, which is historic in the South-West, is developing strongly in the other production basins.

Exports, particularly to Spain, which has a high demand for white meat poultry feed, also represent an important outlet for French sorghum. Bird breeding, with higher quality requirements, especially visual, is also developing for white and red sorghum, mainly in the United Kingdom, Belgium and the Netherlands. Other markets, based on innovation, are currently developing: food (beer, flour, etc.), industry (methanisation, fuels, biomaterials, etc.). “Sorghum is “in”, not only as a crop that saves water and inputs, but also as an outlet (gluten-free and with a low glycemic index) and I am convinced that it has many cards to play in the near future. And as more and more manufacturers are buying sorghum, a virtuous circle favourable to the development of sorghum is being established in France”. The acreages have been increasing steadily over the past few years should therefore continue to grow. We can understand Julie Toussaint’s optimism for the future of sorghum in France.